It was a pretty good month for stocks. The Dow Jones actually gained 11% during the first 2 months of 2019, its best 2 months in a decade. 🙂

But not everything is looking positive. Bond yields have been falling since December, suggesting slower growth. And the number of Canadians who filed for insolvency rose dramatically last year due to higher interest rates and mounting household debt. 🙁 The Bank of Canada governor Stephen Poloz has stopped hiking rates since October of last year to give debtors some breathing space. But it may already be too late. According to the Office of the Superintendent of Bankruptcy, 125,266 Canadians became legally insolvent in 2018, the second highest number since 2011. The Canadian Association of Insolvency and Restructuring Professionals (CAIRP), which represents 90% of Canada’s licensed insolvency trustees, said Canadian bankruptcies are set to spike in 2019. It appears that some people weren’t aware that there is always a lag between interest rate changes and the impact on household finances.

Overall February was a pretty good month for myself, with an above average net worth increase. This was mostly due to the strength in the financial markets. 🙂

The higher cost of debt has personally increased my monthly interest payments. 🙁 However, it has also increased my interest income from certain investments. Hurray for interest rate hedging. 🙂 For example, below is a part of an email I received last week from one of the private mortgage funds I’m invested in.

“As interest rates increase and loan losses remain historically low our top-up dividend was growing close to 1%. We are expecting the rate of return to shareholders for the year ending June 30th 2019 to be higher than last year.” – Portfolio Manager of Antrim MIC

I made a lump sum payment towards my margin account to pay down some of my margin loan. I would like to get my total debt balance to below $400,000 by the summer. This is to prepare for future rate hikes that could be coming later this year.

It looks like someone used a black marker to draw glasses on the left kid’s face.

That’s an awesome net-worth growth in month. The people who stayed invested during the recent market correction are doing well for last couple of week.

Hopefully you will hit your $1 million by end of this year ..

Staying in the market is often the best solution. If more people understood this point there would be fewer financial meltdowns. I’ve noticed my portfolio has fully recovered as well. It’s too bad the stock market dip in 4th quarter last year ruined my otherwise smooth looking net worth graph lol. Thanks for stopping by. 🙂

Good post, great growth. Markets down last November/December really helped those out who invested more in that time frame. I invested a lot more than I usually do in that period, to the tune of a 7% gain so far since markets recovered!!!
On a side note, is it possible to share your networth spreadsheet??? It looks like it was built on google sheets, was just wondering if it was possible to get a copy of it?
Love the blog man, keep it up.
Todd

Congrats on averaging down your book value. I should have invested more during the last few months of 2018.
Here’s the spreadsheet for my net worth calculation for the last 5 yrs. I use these numbers to make the chart in my monthly posts.
The left column is “assets,” then “liabilities” in the middle, follow by “net worth” column on the right. 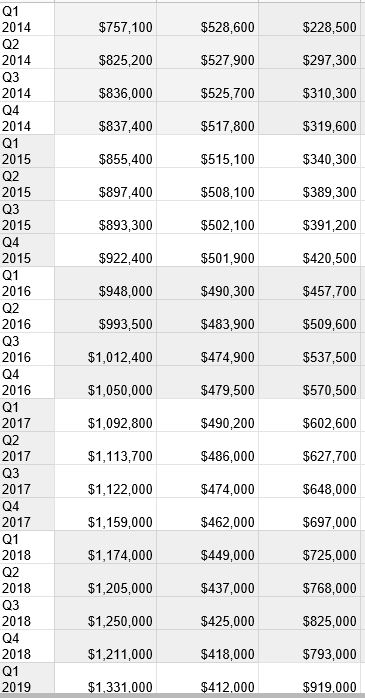 Will you be blogging an update on your progress with the Lending Loop? Would be interesting to hear your experience if you having been active on the platform still or if defaulted loans have impacted your returns. Thanks!

Yes, I’ll be posting a lending loop update probably next week, explaining my 2nd year experience. 🙂
I’m still active on the platform, checking in about once a week. New loan volume has been declining, and I’ve had 1 default so far with many more currently delinquent.
Overall I feel like 2018 investment returns are less than 2017 due to more late payments and delinquencies. But I haven’t done the math yet to see how much it’s affecting the bottom line.

I like seeing the progress on that debt… In the end it will provide you leverage when the next market crap out rears it’s head, and instead of it being a negative thing, it will be a time to capitalize for the future 😉 – Cheers

Looking forward to that market downturn. People have been talking about it for some time now. 🙂