Investing is a lot like dating. Low confidence can keep you out of the market. A good way to gain confidence is to learn from those with experience. 🙂

When you do an internet search for “famous investors” you might see a list of highly experienced individuals. Some are dead. Most are alive. But despite being from different backgrounds, all the investors from the search result appear to have one thing in common.

None of them are wearing hats. A piece of headwear can tell a lot about someone’s personality. However, there is one famous investor that didn’t come up in my search results but does like to wear hats: and that’s Hetty Green. There aren’t a lot of photos of her because she died in 1916, but she had an incredible investment career. Here are five lessons we can learn from Hetty.

Wearing hats wasn’t the only trait that differentiated Hetty from other world class investors. With her grandfather’s encouragement Hetty had learned to manage her family’s financial accounts when she was just 13 years old. Born into the Quaker family (yes, the cereal name) Hetty was raised with conservative financial principles that would stay with her for life. The world was much simpler back in the days before Instagram and electric scooters. But while other kids were playing hopscotch outside, Hetty was busy reading financial papers and stock reports. 🙂

When her father bought her brand new clothes, Ms. Green sold her new wardrobe and purchased government bonds with the money instead. She eventually turned an inherited sum of $6 million into $100 million by 1916, which is the equivalent of $2.3 billion in today’s climate thanks to inflation.

3. Have an independent mindset and don’t follow the crowd

Hetty followed a contrarian investing strategy where she bought stocks and bonds when the market was full of pessimistic sentiment. She also had a knack for snapping up cheap real estate deals and trading railroad companies. In her own words she told the New York Times in 1905, “I believe in getting in at the bottom and out at the top. I like to buy railroad stocks or mortgage bonds. When I see a good thing going cheap because nobody wants it, I buy a lot of it and tuck it away. I keep them until they go up and people are anxious to buy. That is, I believe, the secret of all successful business.” She showed off this strategy a couple years later in 1907. After deciding that the market was overvalued, Hetty called in all her loans. Then, when the market crashed, she swooped in and bought them again at the lows. This line of thinking is very similar to Warren Buffett’s investment advice about being “fearful when others are greedy and greedy when others are fearful.”

END_OF_DOCUMENT_TOKEN_TO_BE_REPLACED

Remember in Marvel’s The Avengers movie when Tony Stark (Iron Man) bragged about being a “genius, billionaire, playboy, philanthropist.“? Well I think Bill Gates is like the real life version of that 🙂

How many times have we heard negative connotations towards money like the following phrases? Money is the root of all evil, money corrupts, money can’t buy happiness, etc. Interesting how it’s usually the poor who says these things. Which is most likely why they’ll stay that way because if they associate money with negativity, there’s less incentive to go after it 😕

But just because someone is rich, doesn’t mean he or she is greedy or vain. According to the latest numbers by Forbes, Mr. William H. Gates III is the richest person in the world today with a net worth of $77 billion as of March 2014.

But what’s even more impressive is how he has already donated over $30 billion over his life time so far. This means that if he had kept all his money from the beginning, he would have a net worth of over $100 billion dollars today! Which would probably be the first time in history for anyone to break the 12 figure net worth barrier.

END_OF_DOCUMENT_TOKEN_TO_BE_REPLACED

July was an amazing month for stocks 😀 The S&P 500 index which contains many US stocks I own has climbed higher than 1,700 for the first time evar! My gut feeling tells me the market is fully priced right now so I’m not going to buy any new stocks for the next month and just focus on other ways to build up my wealth.

Speaking of wealth, Forbes has put together a list of the 15 richest personalities from popular movies, novels, television shows and games. Over the last year the combined net worth of the Fictional 15 has climbed 3% to $215.8 billion. Geez, even the fictionally wealthy are getting richer and richer 😛 Scrooge McDuck takes first place with a net worth of $65.4 billion. Tony Stark (Iron Man) has $12.4 billion from his defense contracts and inventions. Bruce Wayne has an estimated $9.2 billion from Wayne Enterprises. Tywin Lannister from Game of Thrones has $1.8 billion, and Lara Croft from Tomb Raider has $1.3 billion from her inheritance and treasure hunting 😀 How many characters do you recognize from Forbes’ Fictional 15?

It’s worth pointing out that Carlos Slim and Bill Gates have net worths of $73 billion and $67 billion respectively so not even the richest characters from fictional wealth can compete with the wealthy celebrities of the real world, lol. What the rich seem to have in common (real life and imagined) is they all have a great story to tell 🙂 Maybe when I’m retired some day I’ll have a nice tale of my own. In July my net worth climbed higher again, mainly thanks to the recent rally in the stock market. 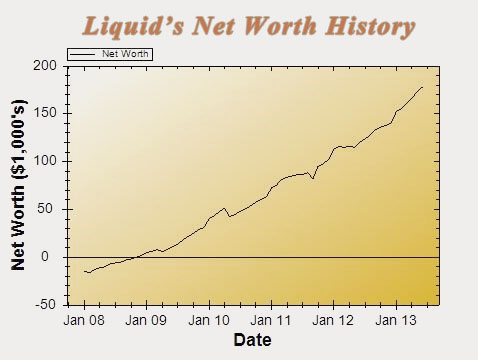 July has treated me like royalty.  I got a small raise at my full-time work, the stock market climbed to record highs, and no unexpected expenses. This perfect recipe led to a net worth gain of $5,800 🙂 Holy mashed potatoes, no idea what I did to deserve this luck. On average I only see $3,500 increase a month, so I certainly don’t expect this recent trend to continue.